Can One Sheep/Goat Suffice For Many People In Udhiyah/Qurbani? 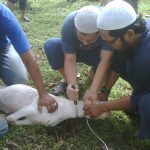 Recently on social media people were saying that there is no need to slaughter more than one sheep or goat per household.

They quoted the following Hadiths to substantiate this:

2. Narrated by ‘Ata ibn Yasar (rahimahullah) a Tabi’i asked Abu Ayub Ansari (radiyallahu ‘anhu) a Sahabi that how did you do sacrifice (udhiyah) during the time of Rasulullah (sallallahu ‘alayhi wasallam)? Upon which the Sahabi said during the time of Rasulullah (sallallahu ‘alayhi wasallam) a person gave one goat for sacrifice (udhiyah) on behalf of himself and his household (family). They used to eat from it and distribute from it. After that people started doing pride and the situation changed as it is now.

Is the deduction correct?

So, According to the Hanafi ‘Ulama, this deduction is incorrect.

Basically, if there is only one person in a house on whom the udhiyah/qurbani is binding, then one sheep will suffice.

The Hanafi Jurists have ruled that it is binding (wajib) on every mature, sane person who has the nisab (zakatable amount) and is not on journey, to slaughter one sheep or one of seven parts in a cattle or camel.

Simply speaking, according to the Hanafi school, the obligation is separate on each individual. They may only share in the big animals; like cows and camels. One sheep will not absolve more than one person of their obligatory (wajib) sacrifice.

There are several authentic narrations in which Nabi (sallallahu ‘alayhi wasallam) issue an explicit command to an individual to slaughter a goat or sheep.

‘Whoever slaughtered before the salah, should slaughter another in place of that one. Whoever hasn’t yet slaughtered should now slaughter [after the salah] while taking Allah’s name.’

In none of these narrations did he (sallallahu’alayhi wasallam) ever say: ‘do it [slaughter one sheep/goat only] and the obligation will fall of all your family members.’

Neither did he (sallallahu ‘alayhi wasallam) say:

‘Whichever household has already slaughtered, should repeat, or that household which has not yet slaughtered should do so now [after the salah].’

Rather his address was to each [eligible] individual.

Hence, it is clearly understood that as far as the obligation is concerned, it is directed separately to each eligible individual. The following narration evidently supports this:

‘Whoever can afford to slaughter in this day but fails do so should not even come to our Eid salah.’

(Sunan Ibn Majah, Hadith: 3123, Mustadrak Hakim, vol.2 pg.389. Also see I’laus Sunan, vol.17 pg.212-217. Although some experts deem this more correctly attributed to the Sahabi, in this case that does not make much of a difference as explained by Moulana Zafar Ahmad in I’laus Sunan)

3. In a Hadith of Sahih Bukhari, a Sahabi (radiyallahu’anhu) who had slaughtered before the Eid salah offered the following excuse:

‘I knew that today was a day of slaughter, and I wished that my animal be the first to be slaughtered in my house.’

This shows that there were others in the house who were going to slaughter as well.

‘Your sheep/goat it not counted as the obligatory one….’

The Sahabi was then instructed to slaughter another animal after the Eid salah.

If this animal was on behalf of the obligation of the entire household, Nabi (sallallahu ‘alayhi wasallam) would’ve said:

Thus it is clear that in that home, there were others who were going to slaughter separately.

Moreover, in this particular case, Rasulullah (sallallahu ‘alayhi wasallam) would’ve told this Sahabi, that although his slaughter was invalid, he need not to repeat it since there are others in his house who were going to slaughter anyway, and that would absolve him too.

This was not the case. He was instructed to repeat his slaughter, since it was obligatory on each individual separately.

Therefore according to the Hanafi School, in light of the above, one sheep cannot suffice for more than one individual as far as the wajib obligation is concerned.

Explanation of the Hadiths in the question

1. Therefore, the Hadiths in question should be understood as referring to ‘non obligatory’ slaughter.

In none of the narrations does it state that the sacrifice that Nabi (sallallahu’alayhi wasallam) offered on behalf of others was the binding sacrifice. Rather, these are understood to be the optional sacrifice.

Just as the slaughter of Nabi (sallallahu’alayhi wasallam) on behalf of his entire Ummah [as in the first Hadith in question] is not considered as sufficient for their obligatory slaughter. It is merely a dedication of the reward for them. Similarly, any other Hadith that mentions slaughtering only one sheep or goat on behalf of more than one individual will also be viewed in this light. i.e, it was not their obligatory sacrifice.

2. As far as the second Hadith in your question is concerned, Imam Muhammad ibn Hasan (rahimahullah), a direct student of Imam Abu Hanifah (rahimahullah) and the third most senior scholar in the Hanafi Madhab explains:

[This applies when] ‘A man who is in need [i.e, one on whom it is not binding] slaughters an animal to feed himself and his family.’

‘This will not suffice for more than one in terms of the obligatory slaughter. In that case, one sheep/goat will only absolve one individual. This is the view of Imam Abu Hanifah and all our Scholars.’

The above two interpretations apply to all such narrations which outwardly state that one sheep was slaughtered for an entire household.

3. If per chance these narrations were referring to the mandatory slaughter, then it applies to the ‘man of the house’ having being the only one on whom it was obligatory.

Therefore, only one per house was a common practice. This is in keeping with the general condition of poverty among the sahabah (radiyallahu’anhum).

Note: this logical objection is levelled towards the misunderstanding of the opposing view, and not levelled against the Hadith, Allah forbid. The same applies to the other rational arguments in this document. There is indeed a clear difference between objecting on a Hadith, and objecting on someone’s personal understanding on the Hadith. The latter is widely practiced among the scholars. See Sharh Ma’anil Athar, vol.1 pg.395 & Adabul ikhtilaf, pg.124